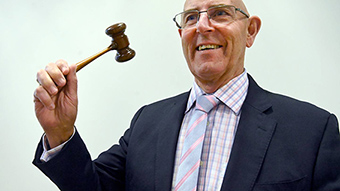 To celebrate Grant Child calling his 9,000th auction last week, Zoe Hunter from the Bay of Plenty Times sat down with Grant to find out what he loves so much about auctions.

You could cut the tension with a knife.

There's standing room only. Real estate agents are sprinkled throughout the room, phones held tight to their ears. Buyers, couples mostly, whisper nervously and shift in their seats or from foot to foot.

Bidding is moving - and fast.

A Mount Maunganui property has been called and a bidding war has begun.

A woman at the back of the room raises her hand, bidding in the $1000s.

To the left of the room, a gentleman has raised his hand confidently bidding $500,000.

But a couple sitting a few rows back from the front of the room has their eyes on this one.

"You're going to have to change your strategy there ma'am," he says to the woman bidding in the single digits.

Another woman raises her hand to tuck her hair behind her ear.

"Is that a bid there ma'am? You've got to be careful here or you'll walk away with a property," he quips.

The bidding war continues between the two couples before one reaches his budget.

The woman at the back of the room shrugs her shoulders.

Couple on the left shakes their heads. Couple in the front whispers to one another.

It's like the whole room has been holding its breath.

The hammer hits down and the winning bidders gasp, kiss and hug while the crowd claps and cheers.

Another 14 out of 17 are sold - millions of dollars worth of property gone under the hammer within a couple of hours.

Grant Child says there's usually a story from the auction room every week.

"You get the emotion of the estate sale. It's been the family home, the kids have grown up there and mum and dad have gone now it's time for the family home to be sold. That brings tears into the auction room.

"The one I absolutely love is seeing first-home buyers securing their first home.

That gives me a real buzz, a real kick."

Child has been an auctioneer for 20 years and this week celebrated calling more than 9000 auctions across the North Island.

He's also celebrating more than a decade with the Realty Group, which operates Eves and Bayleys.

"Getting to 10,000 is the goal and I'm not going anywhere until I achieve it. There are plenty more auctions in me yet."

From army to auctions

Prior to real estate, Child served 20 years in the New Zealand Army.

"I started from the bottom and worked my way up to warrant officer class 1 when I retired as senior transport instructor after 20 years' service."

After the army, Child opted for an "all care, no responsibility" job as a logging truck driver after years of working in a strict, high-pressure environment.

But it didn't take long before Child tired of waking up in the early hours of the morning to go to work. So, in 1995, he moved to real estate.

"My first boss said to me, 'If you want to get some profile go out and get an auction'. So I did. It took me a couple of weeks but I got there.

"So he announced to the team I had just listed my first auction. When everything quietened down I asked what I do now and he said, 'Sell it'."

He watched an auctioneer from Rotorua sell the home under the hammer and thought, "I can do that".

In 2000, Child enrolled in an auctioneers course in Auckland and "the rest is history".

Since then, Child has called more than 9000 auctions as far south as Foxton and as far north as Coromandel.

It was in Coromandel where he sold his biggest sale under the hammer - an orchard for above $7m.

Child said auctions had become more popular over the years, and more accepted as a method of sale.

The first time Child banged down the hammer was at a training auction in Parnell, Auckland, outside a busy school.

"There was a little concrete wall that we had to stand on and call the auction.

"It was right at the peak of the day when everybody was out to lunch and there were school kids around. It was quite daunting."

Since then, Child has been involved in many charity auctions including for the Westpac Rescue Helicopter's quiz night fundraiser and the Ladies' Long Lunch.

"Charity auctions are a lot of fun. It's great to be able to put something back into the community."

Child said there were two auctioneers he modelled himself on - local auctioneer Gil Beadle and Roger Dawson of Christchurch.

"I admired them and I watched them a lot and I thought if I could be as half as good of an auctioneer as those two guys, I would be a good auctioneer."

Child gets "a real kick" out of being an auctioneer.

"Buying and selling real estate is one of the most important things that we do in life. They are also one of the most stressful. I love helping people transition from one phase of their life to the next."

Child said there was a bit of theatre involved in auctioneering.

"Being an auctioneer is a bit like being an actor... It can be quite entertaining."

Being able to read body language was one of the things Child said made a good auctioneer.

"The hardest part is keeping the salespeople entertained because they come week after week and they don't want to be hearing the same old one-liners.

"You've also got to be able to think on your feet."

Being able to count is also a good thing to have.

"Confidence is another one. Being confident standing up in front of people and being confident in yourself and in your own ability."

"There's a number of factors that come into it and when you combine all of those things together, you create a bit of theatre.

Article as published in the Bay of Plenty Times, Saturday 21 November.