EVES Papamoa story on the front page of the BOP Times 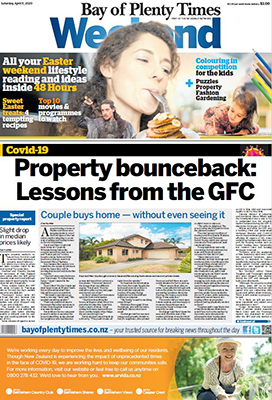 EVES Papamoa salesperson Vince Heuberger's recent sale has been featured on the front page of the BOP Times - "Couple buys home - without even seeing it".

This one of the first signs of the real estate market adapting to a new way of selling and buying homes in Covid-19 lockdown.

Beryl and Peter Lloyd sold their home of 17 years in Whakamarama before the country moved into alert level 4 and “had to get out” so they bought a three bedroom brick house on a 763sqm section in Savannah Place, Papamoa. But, because the country is in lockdown, the couple do not know what the house they will be moving into next month looks like in real life.

“I haven’t even seen the house yet,” Beryl said. “It is hilariously funny. I wasn’t scared in the slightest.”

Now in their 70s, the Lloyds put their large home on Wainui South Road on the market after Peter injured his eye in an accident.

“We knew it was time to go back to the city,” Beryl said. “We needed something smaller.”

Their son spotted a home in Savannah Place that was close to where their daughter lived and was near the shops. Beryl did not have a computer to search online to see what the house looked like, so she phoned her neighbour who had internet access and was able to print out a few photos. “I have two shots of the lounge from two different angles,” Beryl said. “But she started to print out the next page and she ran out of ink.” So Beryl phoned her real estate agent for more information. “I had him describing the house, telling me what colour it is and what it looks like. I sent him back a couple of times. I kept asking how many cupboards are there and the height of the fridge. My son was doing it too.”

Beryl also had some friends do a drive-by. “They said it looks all right from the outside.”

So based on the information they had, the couple bought the home and move in on May 13.

Beryl said she enjoyed the journey of buying during lockdown but it was difficult without a computer. “My family is used to me doing crazy things.”

EVES Papamoa agent Vince Heuberger, who sold the home, said Beryl did not even have email. Heuberger said her son sent images and property details to Beryl’s neighbour, who printed them out and left them at a safe social distance for her to pick up. “There was no floor plan, no video. I just talked it through with her on the phone for over an hour, answering questions about the flooring, the rooms, every little thing. It was quite fun.”

The vendor did not want open homes anyway, and was happy to measure the parking area to ensure the buyer’s campervan would fit, he said.

Heuberger said Beryl knew the area well, liked the size of the section and knew it was his third sale on the street since November, so didn’t want to miss out.

“The seller is delighted. The price is what she’d hoped for from the planned auction.”

The chief executive officer of Bayleys and EVES Realty Waikato Bay of Plenty and Taranaki, Heath Young, said it was a great outcome for both parties in such restricted times. Young said deals were still converting during lockdown but were well down on typical volumes for this time of year. “Many deals are now conditional on final viewings and market activity is building for the eventual lifting of alert level 4.”

Owen Vaughan, editor of NZME-owned property listings site OneRoof.co.nz, said it was encouraging to see Kiwis’ can-do spirit shining through. “Buyers and sellers are still managing to do deals, with virtual walk-throughs taking the place of open homes and agencies running auctions online.

“Some of the sales made in the past two weeks have resulted in above-CV prices, while cashed-up, financially secure buyers are making offers on properties without having physically set foot in them.”

Vaughan said it was likely that when the lockdown lifted there would be a rush to the market by those who were already well advanced in their buying plans before the restrictions came in.

Article as published in the Bay of Plenty Times, Saturday 11 April.